Time to mark down another first as a runner… Or to be more correct, as a non-runner.  For the first time ever, I went to a race as a spectator.  It was marathon weekend in here in Cleveland and because of a pesky IT band issue, I was forced to watch from the sidelines as several friends and family members completed the 10K race. 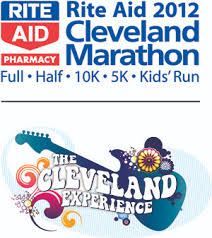 The fact that I have had to seriously dial-down my running for the past six months has definitely put me in a funk at times.  (Or maybe you could already tell that from the severe lack of blog posts recently?)   So I assumed  it would be miserable to head to the race as a non-competitor, dressed in street clothes.  I’d be hanging out with my cousin’s daughter and serving duty as the  “race butler” … You know, the person that comes along to hold the bags of those that are actually running … Yippee, right?

Instead, I found myself thoroughly enjoying the experience.  I woke up bright and early with my husband and was actually able to help him get ready instead of being consumed with my own preparations.  The early morning train heading downtown was filled with runners and their families, the air buzzing with excitement and anticipation.  But instead of being distracted by my own nervousness and a brain busy with a pre-race checklist, I was able to relax and enjoy the view from the window as dawn broke over the city skyline.

Rather than spending time worrying about a warm-up, stretches, and the length of the port-o-pottie line, I was able to watch the start of the full and half marathons.  Let me tell you, if you’ve never seen 15,000 people lined up as they begin an epic journey, you need to get out there and do it!  Totally awe-inspiring.  After watching the start of the 10K, and snapping some photos of the gang as they got on their way, we headed over to stake out a spot near the finish line.

That was when it occurred to me, out of all of the races I’ve run in, I’ve never actually SEEN the  winners of any of those races.  I’m always somewhere back there on the course, worrying about my splits or some other such detail.  But that day I got to watch elite runners as they approached the finish, marveling at their amazing form and physique.  Seeing a Kenyan glide past you at a sub-5:00/mile pace, making it look almost effortless …  once again, awe-inspiring.

After the winners came the not-quite-elite-but-still-really-fast runners.  You know, the ones that have everyday jobs and no hope of prize money, yet still manage to squeeze in the training necessary to place at the tops of their age groups.  And then came more and more of the “regular” runners,  those that have no hope of winning any type of award and are just racing their own race.  Whether pursuing a PR or just trying to finish in a vertical position, those are MY people, the Joe Shmo’s of running.

Through it all I was cheering, applauding, yelling, and doing whatever I could do to help spur each runner that passed.  I think the people next to me were starting to get a little ticked off by my lunacy, because apparently they planned to cheer only for runners that they had a personal relationship with.  Maybe they were non-runners that don’t realize the impact that crowd support and sideline encouragement can be during a race.  Or perhaps they were just cranky because they had to get up before dawn to watch other people achieve something remarkable.  Nevertheless, I was not deterred, and I did not let it hold me back from repeatedly shouting, “Good job!  You can do it!  Finish strong!” to every man, woman, and child that approached the finish line.  The more tired and sweaty they looked, the louder I yelled, and the more fun I had.

In a way, it was like a chance to repay the debt I had accumulated during past races.  In exchange for the cheers, whistles, high-fives, and cow bells that had spurred me on to my own finishes, I could now do the same for other runners.  And seeing the determination on their faces only helped to fuel my own determination to get back out and do it again.

I took that spark and ran with it.  (Pun completely intended!)  Back home with a renewed enthusiasm for the physical therapy, stretching, and strengthening, I started plotting my return to the racing scene.  It may not be fast and it may not be far, but in the words of Ah-nold … “I’ll Be BACK!”

Error: Twitter did not respond. Please wait a few minutes and refresh this page.