I planned on writing a typical year-in-review blog.  You know the type … These were my goals, this is how my training went, blah blah blah.  And if you already posted something like that, please don’t take offense.  I totally understand, and I really do enjoy reading about your accomplishments!

But I had an “aha” moment this week (not surprisingly) during a run.  Not just an ordinary run, either.  I was running through a blizzard.  Yep, I looked outside at the swirling snow, the unplowed street, and said, “Hey, I should go out for a few miles.” 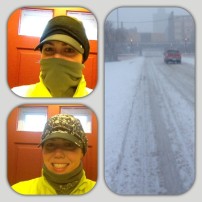 Blizzard Run: Before, During, and After!

So I layered-up, laced-up, and headed into a winter wonderland.  As I leaned into 30 mph wind gusts and wobbled my way through six inches of fresh powdery snow, I realized something.  I wasn’t out there because of a training schedule, a weight loss goal, or some other numerical obligation.  I was out running because it was something I wanted to do.

Some people may reserve the term “athlete” for those that excel at a sport — For example, a runner that meets some arbitrary level of speed or distance.  But now I realize that being an athlete is more about EFFORT than about specific numbers.  So, for what it’s worth, this is MY definition of athlete:  A person who has the strength, ability, and desire to participate in physical pursuits on a regular basis.  And that’s what I have become, although, I’m not sure exactly how or when it happened …

Maybe it was that I didn’t throw in the towel when my IT band forced me to stop running for a few months.  It sounds weird, but I found a strange pride in having a sports-related injury.  I mean, you can’t get one of those while you’re sitting on the couch, right?  I remember one moment when a particularly tough therapy assistant was harrassing me about my sloppy effort by saying, “Come on, you’re an athlete, you can do better than that.”  If she called me an athlete, could it be true?

Or maybe it was when I decided that swimming laps was not enough of a workout on its own.  So I started biking to and from the gym, which is about 9 miles each way.  Those were some of my favorite workouts of the summer!

Or maybe it was when I was able to walk into a running store without feeling like a deer in the headlights.  I had a nice conversation with the owner about running form, new shoe models, and local race courses.  Phrases like “my weekly mileage” and “mid-foot strike” rolled effortlessly off my tongue. 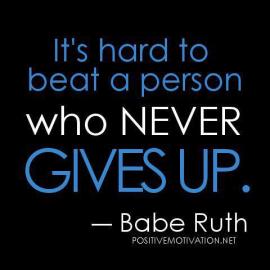 Or maybe it was the day that I crashed my bike during a particularly long ride.  I was battered and bruised, but I patched myself up enough to ride the remaining several miles home.  I had a grass-stained shirt, swollen hand, and bleeding leg … but I kept up with the guys for the rest of the ride and felt pretty stinking tough while I did it.

Or maybe it was when I realized how much I look forward to my early morning workouts.  There is something I really enjoy about waking up and heading out the door before most people have started brewing their coffee.  (I know, sick, right?!?)

Maybe it didn’t even happen at one particular moment.  Maybe all of this year’s experiences were like drops in a bucket that collected until it eventually overflowed.

What about you … How was your 2012?  Do you measure your success by the numbers (distances, race times, etc.) or by something less black-and-white?

The author is a wife, mother, and solidly average “middle of the pack” runner from Northeast Ohio.  Find her on Twitter, @MileageMama:  https://twitter.com/MileageMama

Error: Twitter did not respond. Please wait a few minutes and refresh this page.